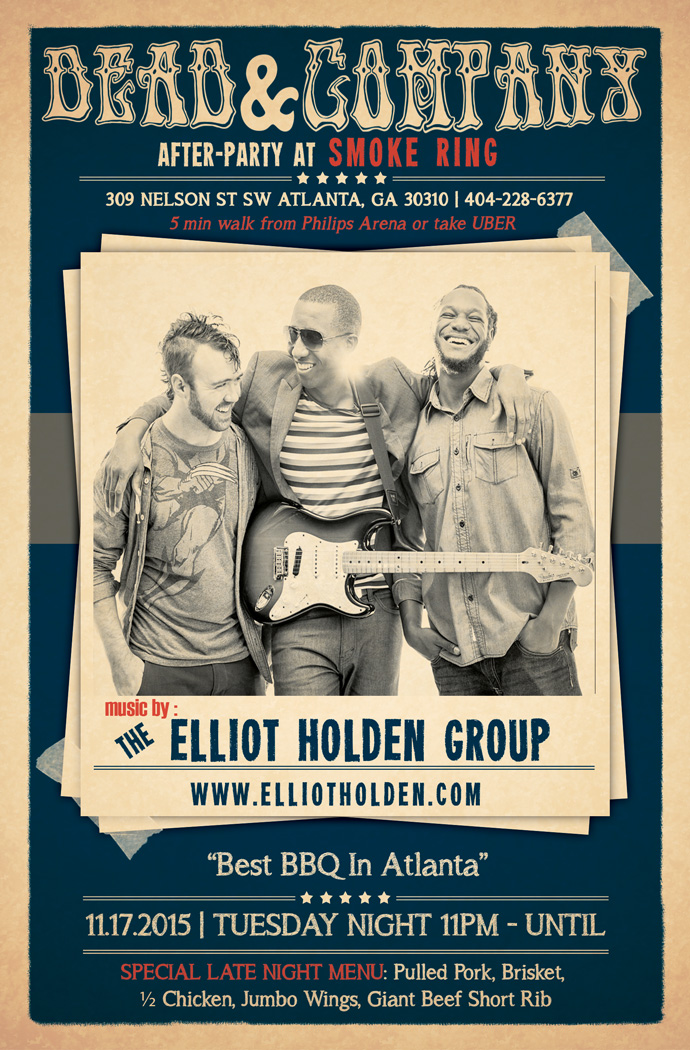 Join us for this special Dead & Company After Party at Smoke Ring located at:

The Elliot Holden Group consists of Elliot Holden on guitar/vocals, Wilgens Pierre on bass and Court Tatum on drums. This band is nothing but stellar. Effortlessly navigation from original songs to Hendrix, Miles Davis, Meters and everything in between.

Smoke Ring only a 5 min walk from Philips Arena nestled in the beautiful Castleberry Hill loft neighborhood. You can also save yourself a couple of steps and take UBER. The live music starts around 11pm or soon after the Dead & Company show is over. The first 50 patrons will receive a FREE – Elliot Holden EP CD.

Smoke Ring is helmed by chef Jordan Wakefield, who cut his teeth rising through the ranks in Atlanta’s kitchens and most recently worked at Meehan’s Downtown. Wakefield’s menu is a love letter to his Southern culinary heritage, but taken up the culinary ladder a few rungs. There is a laundry list of sharable apps to start you off. Deviled eggs are smoky-sweet bites of heaven, with bacon, bourbon marmalade, and green onion. Pig ear “fries” are brought outside the South, dusted with chipotle and accompanied with the restaurant’s signature Guinness mustard barbecue sauce (sharp and a little bitter, you’ll want to steal a bottle and put it on everything).